Riding a moped through Paris 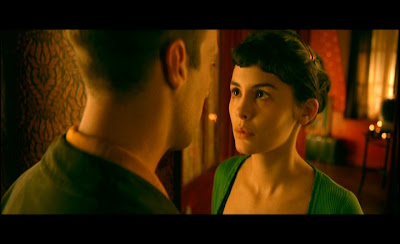 When Mr. Hall and I starting dating, we would rent movies. Only we would talk through them. We talked a lot. tons andtonsandtonsoftalking.

Then. We went and saw films in the theater. He was the first man who brought me to a foreign film. I didn't have to explain or beg or bargain for this. He likes foreign films too. He was my first boyfriend who likes the foreign films.

"They have naked boobies in the French films", he would joke.

So we saw Amelie. As we were buying tickets, we noticed the title spelled out phonically , like this: Amelie (Ah May Lee)

I've loved that movie ever since. Still do. Just like Mr. Hall

Luckily, our ending is nowhere is sight. :)

That is by far my favorite film. Amelie is so lovely and cute. Great pic!

LOVE this movie! When we get together again, I'll tell you how I watched it the first time with my son;)