Open letter to my friend who is gettin divorced

Seems divorce is happening around me lately. In places I never expected because well, marriage is suppose to be forever. 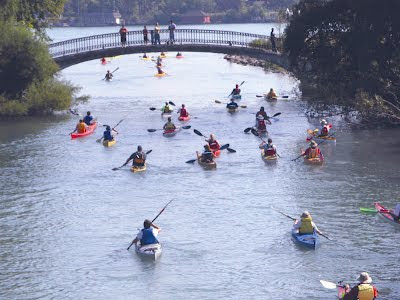 I have a lot of opinions on marriage. Well, not opinions but ways I can suggest to make it better. First, even before you get married, sort yourself out. If you are addicted to booze, drugs or food, get that fixed. If you are an asshole, get that fixed too. Same goes with selfishness, cheating on your girlfriends, meanness and general inflexibility. Work on your tolerance and mercy. Work on you to make you marriage material.

Next, find someone you want to marry. Get to know them. Look at that list up there. Are they an addict? Are they an asshole? Are they living with their mother and no plans of ever getting their act together? Decide what is your deal breaker and stick with that.

Decide what you want out of marriage and discuss with them. I can't stress this enough. Discuss values, goals and how many kids you want or don't want. I can't stress this enough. I see too many of my patients just merge with the next hot chick they see. After a lot of bar shots off of their bellies I bet. But a love of shots, being young and reckless does not a marriage make.

So yeah, a lot of prep work in the beginning will save you a lot of fixing while IN THE MARRIAGE. Fixing a marriage is hard work. People have to step up and change what they are doing. But--i've seen it happen where people--- who are absolute animals towards each other--I've seen that they can learn to change and make a healthy marriage out of a sucky one.

I don't think this is my friend's problem though.

My friend is actually my high school boyfriend who I dated for about 3 years. My only complaint from the relationship is that he never did stop doing drugs or getting drunk. He just saved it for Fridays when I wasn't with him. That and I'm 100% sure he gave me crabs-- but bygones people!!

I found him on facebook a few years ago and we talked a lot. He's a good guy. Good provider. Has a small girl with this wife and besides the fact he still talks about getting wasted... and they are both over 200 pounds . . . i never really saw anything amiss.

I remember when I first contacted him I had such guilt. When we were breaking up I was experimenting with so many things . . . lsd . . . living in the big city . . . dating girls . . . .it was a time of young, punk and naked stuff. I was turning feral. But, that's what one does when one turns 19 and leaves home. In short, he was a townie and I was on my way out.

I was happy to learn he was married. I always felt bad that we never even considered marriage. I was way too young in high school. I had no idea what a wife was. That all changed with Mr. Hall though.

When I asked about his wife he said, "she saved me." I was happy he was making a life and was still the same good guy I knew.

But know, it looks like he will be getting separated and maybe divorced. I feel bad for him. I want to reach out and say something. Like this.

I'm so sorry to hear about the 'relationship change'. I realize this isn't my place, but I want you to know my heart goes out to you. Marriages busting up really do suck. I can pretty much guarantee that you are still the same good guy and I can't imagine what has happened.

I hate to say this and I don't want to say something that will offend you, but have you tried counseling? Is she interested in counseling? I'm not sure what has happened but I can say from my experience, if two people are interested in saving their relationship and if they are willing to come to counseling, it's amazing what can happen. Maybe just schedule an intake for you, to help you through this process.

Either way, if you need anything, I'll be here for you. If you're ever on our side of town, you and your daughter are welcome for a bbq and a swim in our pool.

I'll be praying for you-


Maybe I'll send this. who knows?

Not just a river in Egypt

This is me 19 weeks pregnant. I took this photo today. 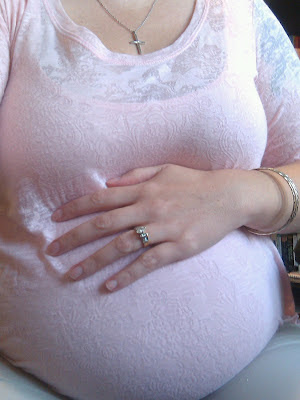 Drove into work yesterday and was thinking about flashmobs. If I have one thing on my bucket list, it's to be in one. Then I started sobbing. Flashmobs just seemed so unbelievably sweet and tender that I started to cry. Tears flow pretty easily these days over the simpliest things. They are happy, sweet tears :)

I've had to buy a bigger set of clothes. I broke down and bought maternity pants.

I'm starting to feel like a human being. The constant exhaustion and nausea has faded and I've started painting my toes again. Next I'll try putting on make up on a regular basis. I'm eating more, food has started to taste less like dish soap and more like food!

But the biggest change I've noticed, is that I look like that up there. That really is me in the photo above. I still can't wrap my head around it. At night, I stare at myself in a full length mirror. Absolutely gobsmacked by purple stretch marks, blue veins and fleshy roundness.

It blows my mind. How did this happen?

I believe I've been in denial.

Even when the doctor asked me if I felt the baby move, I didn't know. Was the fluttering real? Was the tiny pushes from tiny arms real? I told him I just didn't know.

I do now though.

I feel the little bean moving around in there. It's never the same, not like other belly sensations which have a rythm and predictability. The baby moves at different times and in different ways. I get greedy about it. Pushing on my roundness. Trying to get her to react. She doesn't though. Stinker!

And just like the Lord above, we love our children even before he is born. The love is unbelieveable now. I feel absolutely flooded with it.

Let's talk about Lane Pryce, shall we? 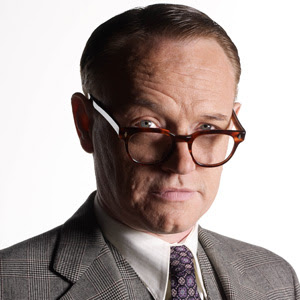 Knee deep in Mad Men love here. This show, it just gets to me. Much like the sopranos before it. It's just so rich and layered. Last night's episode was sort of a death knell for the Lane character. I haz a sad about this.

First, let me say, I didn't like Lane at first. English twit and all that. However, I've now grown an affection for him. He is so deeply sad. Bound up in his sad, sad life. He is a nice guy who is finishing last.

It doesn't help the fact that he's now actively lying and hiding things. This will get you nowhere. Jesus and the IRS sees all people. Best to fess up, take your lumps and rebuild.

It also doesn't help the fact that he carries himself insecurely. Well, unless Pete insults him-- at which point: 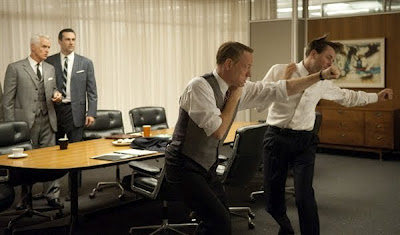 Pete had that coming. I really really dislike the Pete character. I'll never like him. I hope Trudy dumps his stupid butt next episode. I love Trudy. It's the only reason I watch community. Just to get my pseudo Trudy fix. She's better than Pete, he's bound up in his own way too. Bound up in entitlement and miserableness.

Which is where this post comes back to me.

I have a number of patients who carry entitlement and react like children when they don't get what they feel they deserve. And, like every job, there is a certain expectation of catering to the patients we serve. Thus, I need to drop and/or change my attitude about this type of patient. I can't just ignore them and not listen. I can't direct them on how to solve their own problems. They aren't interested in getting well.

If you are sick, you don't have to attend to your life.

Sadly, some don't want to get well but they keep coming to my office. And whine. They feel entitled to stay sick. AND whine that they are not being taken care of enough.

But, again, I need to drop the attitude about this. I have 26 more years before retirement. Best to let things go, flow the love a little more. After all, working in mental health, (as Mr. Hall says) "Your job is to listen and say 'uh-huh' every so often. It's not that hard."

Just looking through photos. Still not sure how to spell check this stuff so bear wit me. 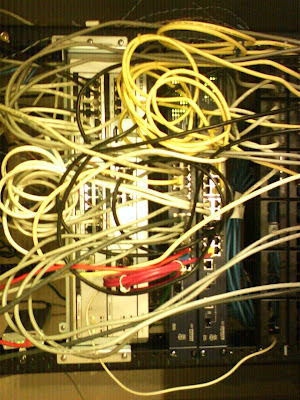 I STILL get annoyed when looking through photos and finding stuff like that up there. That is a photo by Mr. Hall. I am assuming a work photo. But, he has photos like this before he started working on computers. Like when he was nine and took apart a lawn mower. Took photos of that too. 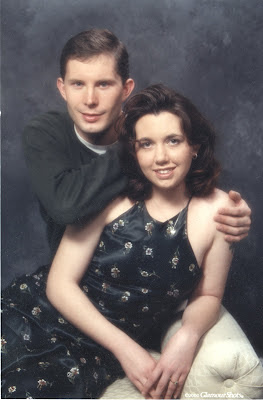 This was us dating. I don't really like the dress. It was done at Glamor Shots. 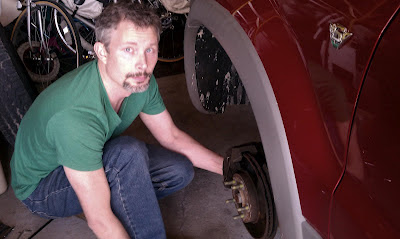 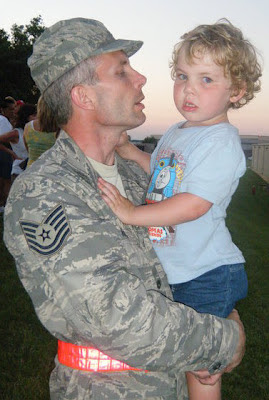 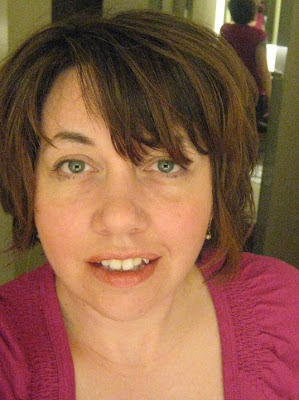 @ a work conference. The lighting in that bathroom was phenomenal. 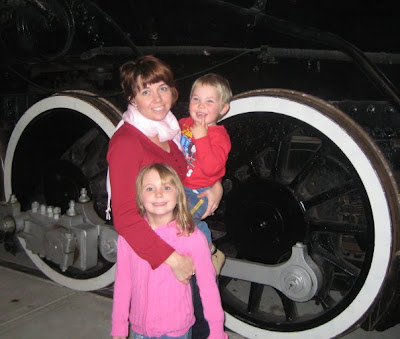 Literally holding the kids in place to get this photo. 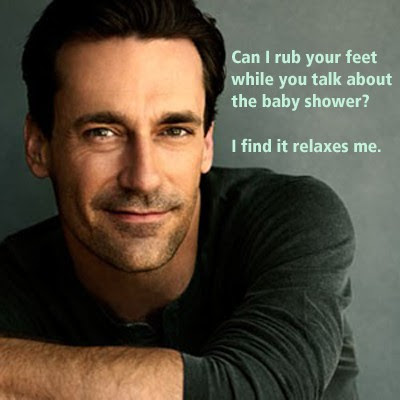 That is not Mr. Hall. But yet, fully worth taking up space not only on the hard drive but here as well.

OK everyone. Hope your weekend was swell. 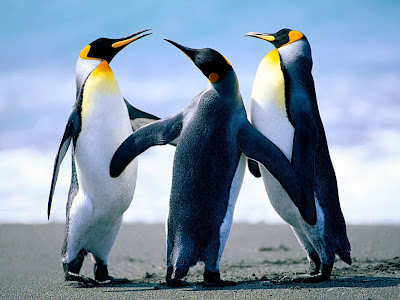 There was this woman I heard about the other day. She had gotten some news from her annual physical, news she didn't understand. Her pap came back positive for the clap. Which made no dang sense. She'd been married for 3 years.

Then, she asked her husband. He admitted he had been cheating on her. With something like 5 women. He says this all casual like. Surprised he didn't caught earlier. He leaves her the house with the two kids. Ages three and one they are.

Men start arriving to repossess the tv, bed frame and dresser. He, the husband, had been paying all the bills. Thus, she didn't realize everything was from 'rent a center'. Sounds like he wasn't paying the bills. She can't really pay them, she works at walgreens.

I pray for this woman who has to rebuild her entire life with not a lot of working capital. I pray that she turns to God in this time of need. This might be the toughest part of her life and she can't do this alone.

But man o man. What a horrible day to get a call that you have an STD. And with that your life crumbles. All on account of the man you call husband being a complete and utter jerk. I pray for him too. I hope he doesn't visit the evil on any of the other women. I hope he seeks out the Lord and asks for forgiveness.

He's going to need it.