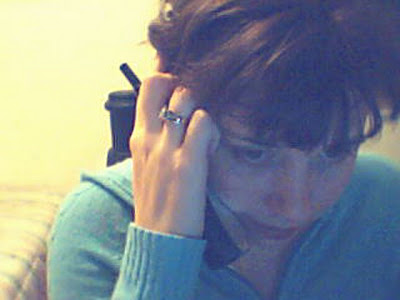 i get a call from my brother Sunday. He said he's getting married in July. To the girl he's been living with for 10 years. The girl he charges rent.

And I'm excited for him. Bewildered though. I mean, what's the big rush? Two months? They've been together for 10 years. Huh, well, I guess it's just time.

My mom calls up practically screaming. NO wait, she is screaming-- with excitement. My brother and his NOW fiancee are expecting. "I'M GONNA BE A GRANDMA TWICE AGAIN THIS YEAR!!! YOU AND CARRIE ARE BOTH DUE AT THE SAME TIME!!" And I'm having hard time hearing my mom, and she's all worked up. Then she came over and repeated this like six times. She's so happy about this. I had to practically scrape her off the ceiling.

It's always bugged her that my brother never married Carrie. It's kind of bugged me to. My brother bugs me in general though. Dude lives 15 minutes away and never visits his niece and nephew.

Well, it is nice though. I'm going to be an Auntie! Nice! WOOT!

My rude Dad asked the RUDE question of whether or not this new bambino was planned. And no, this little baby of my brother's was a happy, joyous unplanned happening. But you know what they say, "You make plans and God laughs."

AND LAST BUT NOT LEAST!

I'm excited because it's about time I had some family gossip to share.

(well not really but still)

I'm that kind of brother to my sister's (now grown) kids. I'm even Godfather to one of them... I think. Let me take this opportunity to say we brothers who are like that aren't that way out of malice or anything negative. We're just basically schleps. If not for my wife I'd probably forget everybody's birthdays but hers and our daughters - which I always remember.

rw: so here's the thing, despite working crazy hours, putting out posts 8 paragraphs long, writing novels on the side AND contributing to THRICE, you can't pick up the phone every other month, give a call and ask how people are? *

you can't hop in your little car every so often and meet for a quick coffee??*

i don't think your dumb, i just think my brother is not putting effort in. he puts lots of effort elsewhere, he's a coach and teacher. has friends, etc. that is a choice he makes. and this makes me sad.

family is awesome. it's just too bad we aren't closer. but this new baby, this may be the ticket to bringing everyone closer. at least I will give my best shot.

*this may OR may not apply to you. just venting and projecting! :)

Holy moly! That's some NEWS! Congratulations on such an exciting year for your family--babies! Weddings! BABIES!

So basically, this is going to be a race to the delivery room..... I will put all my money on you.

Shotgun weddings are all the rage in Kentucky, btw...been to a few myself. :)