A few thoughts on Stranger Things 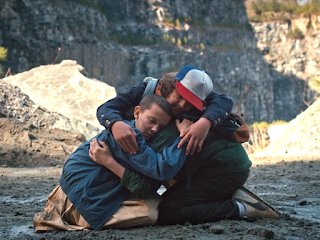 Shows that have a child in danger as the major plot conflict bug me. I am tired and vulnerable. Kids are my alpha omega and so it's easy to over feel about any kids, even tv kids.

It's not a subtle show. The creators obviously have much love for Stephen King novels and played many rounds of D&D. They also seem like amateurs with their writing and production. It's like they have a nostalgia check list to write about. Banana seat bike, 80s music, corduroy backpack, walkie talkie (check! check! check!).  Don't forget to show the mix tape that the boy's brother made. (Super check!)

This betrays the subject matter which again, is about a boy whose missing. Gone. JUST GONE. There is a girl too. Resplendent with Carrie like abilities. The mine is deep but not explored sufficiently. There is an absolute devastation with missing children. The boy's mother, played by Wynonna Ryder, remains upright and functional. Soon she learns to talk to him through Christmas lights. It's a surface and inconsistent performance at best.

I blame the writing that relentlessly ticks off that list versus creating structure for the world to come alive. The creators underestimate the audience and tell too much. I also blame the actress. I don't think Ryder runs that deep. Plus, she's not a mom. What vault does she have to store complex emotions?

There is a cop in the show too. It's the same problem though. The creators are relentless with pulling up that list and using a cheap plot device (the cop had a daughter that died) to make us feel something for him. It's not a terribly complex character but the actor does what he can do.

I can say the kids are the best part of the show. I love the girl. That was the only scene were I loved Ryder. When she's in the pool and Ryder is comforting her like an actual mom. That read right. I honestly felt unsure if I could do that. Not comfort the girl but send her searching for one of my kids knowing it would be harmful to her. This bothered me.

The overriding issue that since all of this has been done before, how to make this series without repeating the master's material? It can be done. Walking Dead is a zombie show. Millions have been before. Game of Thrones has elements explored before as well. But everything can be done in a new way.

The key is to make everything smaller. Tighten up the place and characters. Use only what is needed and let go of wanting to show. Leave loose ends and inconsistencies. But we shall see, here's hoping the writers stop with the relentless checklist and get back to framing a world and characters that are real.
1 Left a message at the beep