This post is an extention of this week's Potter's Ground. (click here) Go ahead and enter, there is still time to score points! 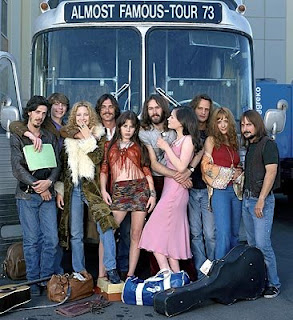 What Almost Famous means to me:

1. One Sunday morning, (age 29) I was watching "The Motorcycle Diaries." Somewhere after the first twenty minutes I started to feel really, really nauseous. I actually um, threw up four times. Wore me out. Yet, I felt nothing but joy. I knew little Mac was real and growing inside me. I was pregnant! I called in sick for work and put in Almost Famous.

2. While I never worked for Rolling Stone, or followed a band on tour, I recognize a lot of the movie as my own. I am a writer and when I was a wee pup, I moved to a gigantic city. I fell in with a band of gypsy-like people and spent a year being very, very happy. I was 19. For the first time ever, and for the first time, I felt like I belonged. I felt cool. But, this is where it gets a little sad.

But, the sad part is . . . Well, the really sad part is, the end of the movie rings just as true. I forget the lines, but the conversation occurs between the Kate Hudson character and the boy. 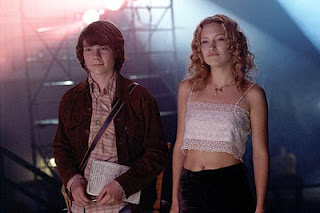 They are discussing her upcoming 'trip' to Morocco. She talks about this a lot, it is like her Mecca. And at some point, he calls her on it. He says, WAKE UP! Your imaginary world, your imaginary trip to Morocco is just that, a fantasy.

And back then, at age nineteen, it was a fantasy. When I woke up and I realized the band of Gypsies were really just a bunch of drug dealers and street urchin. I am neither of those. Those kids that had been on their own since they were little. They had no ability to really love me, I was just an instrument of gain. I was being used most of the time and I had no idea.

Jeez, this is turning kind of sad. It's important though. Important that it happened when it did. Important that I had no real money at time. That I slept on an army cot in a walk in closet. (click the previous words to see pix). I learned stuff. Important stuff through all of this. Like now, I can smell a con a mile away. It pretty much explains my year abroad.

3. The song Tiny Dancer means something very sweet to me. A few months after I got married, (age 24), we relocated 3 hours aways from where we lived. Relocation is a recurring event in our marriage. I moved first. Again, a recurring theme.

I drove my very rusty Datsun home from work at five, and it would be very dark. During one of these times, when I was sad and missing my new husband, getting all tense whilst I drove my POS car on the scary dark highway, all tense from learning a new job, I heard Tiny Dancer for the first time. I can't explain how soothing it was. Then I told Mr. Hall all about this song. Turns out he is a HUGE Elton John fan. I had no idea what I had been missing. The best part--I was driving home to him that night. He had moved up that morning, while I was at work.

There, that's better, that's a better ending to this post!

And who knows, maybe someday I really will be cool. :)

You are cool already.

No, not just being nice. You are cool because you KNOW YOURSELF.

Well enough that you got the marriage thing right the first time around. Not all of us got that right.

Little slices of life such as this are what bind us all together in one human experience. Don't think for a moment that we all haven't had similar moments of revelation and contemplation. Looking back, those are the moments that made us who we are.

James: Why thank ya for the compliment and the marriage is quite awesome by design. ;)

Bruce: Thanks for stopping by. :)

I always love reading your posts.

You've led such an interesting life. :)

Why thank you Big Pissy!

I am glad my life is much much less interesting now. I rather enjoy being kind of boring.

I like your blog too. Very nice and soothing. I am jealous though, we have had 12 inches of snow so far.