Hey NURSE! Stories from my time at the county jail 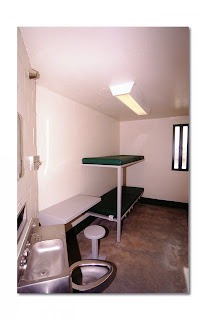 I was a County Jail nurse for about a year. I was reminded of this by a certain number two sister.

If you have even seen an episode of COPS, you pretty much have a complete picture of the County Jail Inmates A.K.A. my patients. Go ahead now, picture them in your head . . . no shirt, no shoes, running their mouth off, white trash . . . ahhh . . good times, good times.

My time at the County Jail is a veritable treasure trove of crazy nurse stories. So, let's begin shall we?

Mr. Johnson had come in four hours prior to my shift. He was loaded on alcohol and had been driving. Drove into the center median, jumped out of his car, ran across the oncoming lanes of traffic and kept on running.

Can ya see it? Lone white male, wearing cut off shorts, barefoot and drunk as hell, drives off road, jumps out of the car and gives foot chase to the police.

SIR!! IF YOU DO NOT STOP WE WILL RELEASE THE DOG AND HE WILL STOP YOU!!! SIR, THIS IS THE POLICE!!! STOP RUNNING AND GET DOWN ON THE GROUND!!!

Yet the suspect keeps running. Cause he's an idiot, and drunk, and maybe he thinks if he runs fast enough, he will outrun the-

For the love of God people, if the police say GET DOWN, get the fuck down ok??? Jeez. Listen to the nurse here. please.

Now, I have met the K-9 in question. All sorts of friendly. He is a family dog to one of the deputies. German Shepard dog. Good dog. Speaks German even. 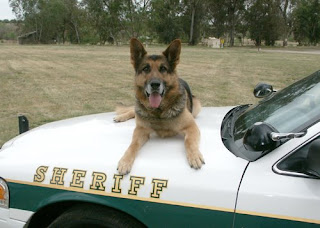 Well, it is the German commands that release the training. The training that taught the K-9 how to take down the criminal. Which the dog did.

Once the suspect was immobilized, he was brought in. Brought in drunk and belligerent. Refused medical care. Refused to cooperate with the booking process. All sorts of liquid courage and superman. He was put into 'segregation' or seg for short. He yelled a lot and then passed out in the cell.

This is where I visited him some four hours later. My task was to clean the wound, check his vitals, check his sobering up status. He was no longer drunk. He was very pissed off though. Not so mouthy anymore, but, in a world of hurt.

The K-9 took the suspect down by clamping down on his right shoulder. Clamping down with a very powerful jaw and sharp canine teeth. The shepard bit through the guy's t-shirt. It was now crusty with splotches of dried blood and matted into the dog bite. There was bits of grass, road pebbles and pus too.

The t-shirt was a total loss. First I cut off the sleeve, then I cut up the back. Gingerly I worked. Slowly peeling an orange.

My breathing was shallow and I became sweaty. I was spooked by what I might find with his shoulder. I was expecting to see torn up flesh, exposed muscle and tendons. There was none of this. Just a very deep puncture wound from the teeth, and some bruising from the crush of the jaw. No torn flesh, just a small and surgical bite wound.

The inmate took my care in stride. He winced a lot but was very quiet.

"It's too late to get stitches now", I told him, "but we can continue to keep this clean and it should heal nicely, you are very young and there is good blood supply. It doesn't look infected at all."

He made eye contact for the first time. I offered a sympathy wince.

"How are you doing by the way?" I asked.

I laughed. He chuckled a little. The deputies laughed. It was really funny.

11 Left a message at the beep:

Nice one.
I like how you say 'the t-shirt was a total loss'.
Is a wife-beater t ever worth saving?
I bet it even had a yellow stain on the stomach and under the pits.

When I spent the summers with my grandparents outside Atlanta, I walked two K-9 german shepards every afternoon...Elka(dope) and Sage(bomb). I was instructed that should we ever pass a person that the dogs found 'interesting' that I should say a german word that sounds like OUT!! Only more like HAUT, or something...

We never had that incident until the last summer when I had just turned 17. It was a nice young fella that ran to his car with a quickness.

The dogs belonged to a man called Joe. Officer Joe of the Atlanta PD. He is good people.

Wonder what would happen if you yelled Weiner Schnitzel?

Geo-Joe: Yeah, that is a good line. Put that in at the last minute. It was a men's v neck under shirt, but yeah, all scrungy and ewwww . . . pit stains :)

hmm wonder if anything will happen

weiner schnitzel would probably tell the dogs to sick balls. :)

Sick Balls is from a movie or something isn't it? Either way, ow ow ow ow!!!

You are so funny!

Holly, could you even stitch those up? I mean, seriously.

They walked in the door the next morning and the first words out of my mouth were.....You both smell like inmates LOL. You know that smell, dontcha?

Good Doggie....hope he got a few extra Milk Bones for that take down.