Toughening up the girl 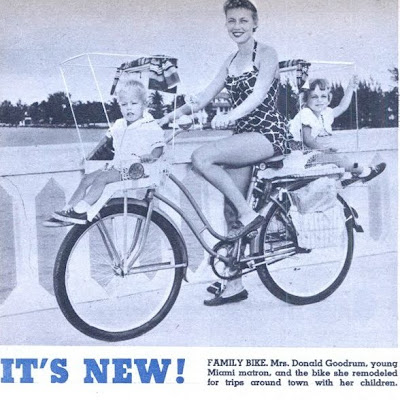 Pancake is the our first born and likes to be bossy. Plus, she has the emotional control of a seven year old, because that's how old she is. This comes flaming out while bike riding with the rest her tribe, The Tribe Called Hall. We ride to Gramma's and back. Four miles each way, on a paved bike trail, next to a busy country road. It's awesome, this ride.

So there we are, riding in a conga line of me, her Daddy and her baby brother Mac. He sits atop the pull behind bike. This is a line she likes to lead. She has a wee two-wheeler, it has one speed. With her streamers a flying, she muscles to be in front.

She gets obsessed with being in front. We use this obsession.

We gently follow her, and then push a bit, like we are trying to pass her. She pedals harder and yelps. It's a game she enjoys, she laughs and digs in, being stubborn. We often yelp along, accusing one and other of farting or being a butthead. Good times, good times.

Sometimes, she takes things too seriously, like when we try to climb a hill. If we try to pass her on a hill, she starts freaking out, then the yelping turns to howling. She starts to sob and snot bubble. Then she starts to hold her stomach, complaining that she's hungry. Maybe she'll hold her leg, saying it hurts. I don't give in. I ignore this. Whining will not get her out of hard work.

Each ride she gets a bit tougher. Less whining, less yelping, less howling. And last night, there was no stopping her. Even on the big hills. That was huge. Because when we climbed the biggest hill, the hill she always stops on, she didn't. We got to the top I pulled up next to her, she was huffing and puffing, all silent and smirky. Then I said, "Pancake, sooo PROUD OF YOU!! You did it!!"

Then she shot me a look and dug in, peddling faster and faster to get in front again.

I am so unbelievably proud of her. I was just bursting!!

Oh sweetcheeks, Mommy loves you so much, you're the best little girl in the whole wide world. :) 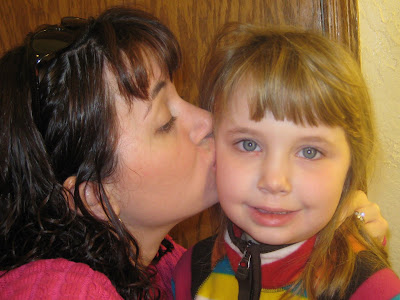 I love how my fingers are curled in her hair, with my ring peeking through.

She was really crabby the morning I took this, but, she smiled for the camera when I gave her a smackeroo!

Which is good :D

wow, i'd be proud of her too. my son is the same age and we are still on training wheels. I've been working with him, but its been tough...

WR: Really, I have a hard time seeing the resemblance :)

Slyde: One of the key things that got her to actually ride the bike was to get a really low one. That way, when we took off her training wells, she could shuffle along with her feet on the ground. eventually she put her feet on the pedals and away she went!

it's hard watching them struggle but he'll get it eventually :)

hills are hard. good for her.