Fine Breaking Bad, I'm not made of wood, I'll watch you. yo. 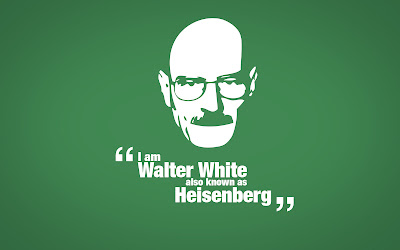 Why don't I give in to these things? Countless bloggers have extolled the virtues of this show. Friends have recommended it. Yet, I have resisted.

Then, I started reading the recaps of the lastest season.

SO. Started watching it.

It brings up a number of questions, season one. Questions Mr. Hall and I debate.

If you had some serious cancer eating away at your insides, would you go through chemo knowing there was only a slim chance it would work?

Would you crank out crystal meth and sell it to people to make the payments on said chemo?

Is it evil to cook and sell the meth?

How come the wife isn't supportive or warm? She's quitely emasculating which irritates the crap out of me. Sigh. SIGH.

She does seem to come around though, near season two beginning.

Why does Walt not have a better job? He seems smart and had some personality in the flashbacks of his life. Not so much of a shell.

Well, for us, the first question is a tough question. About the chemo. We Halls are believers there is much more than this life. If God is calling us home, why fight it? Let God's plan unfold, it's going to anyway. But, if Walt went on hospice, prayed and quietly went into this good night, it wouldn't be much of a show-now would it?

Question 2: Is it evil to cook and sell the meth?

This divides Mr. Hall and I. I say yes, selling meth is spreading evil. He says no, people have personal choices that they make and we aren't responsible for them. It's a weird sticking point between him and I.

There are a thousand other things underneath this character. Things manly and masculine that I can't begin to fathom. Men have a call to fix, to provide, to be men. I do worry though. Where is the wellspring of yon Walter White's power as he becomes a man?

I envy your journey over the next few seasons. It's...amazing!

i can tell the series is layered. the writing is phenomenol! (sp?)

it's sucking me in!!

I've heard such wonderful things about this show. Mr. D and I need to start watching it.

just give in G! what else is there to watch? :)

Question 2 - Mr. Hall is WRONG, you are RIGHT. I'm sure that's common more than not in the Hall household, lol.