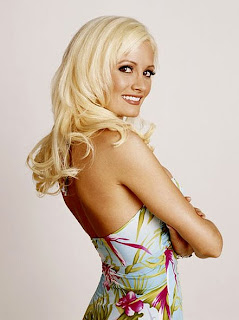 Holly and Hugh Hefner have broken up.

So it has come to this. This woman over there, Miss Holly Madison, is not getting her man. Not getting the Princess Wedding at the Disney Castle. And not birthin' no baby bunnies.

It is upsetting. I was so rooting for this doll of a woman. Read this post for why.

It is very, very upsetting. I liked Holly. Girl's Next Door was the last cable show I watched before my cable disappeared. I watched it and discussed the girls at some length with Mr. Hall, started to think about buying their booble head dolls and their perfume . . . . maybe that is why Mr. Hall took the cable away.

This is what this is really about, this fascination with Miss Holly. It all comes down to Mr. Hall.

Ya see, when I was in nursing school, the man who would be my husband moved to the tiny, oh so tiny town I lived in. It consisted of one, highly ranked college and a redneck bar on every corner. He said to me then, and says to me now, "Babe, if you ever wonder if I love you, remember where I moved for you."

He was passive aggressive against the town. He wouldn't learn his way around the town. Although, that was a ruse, I mean, it only had like three main streets. He wouldn't get a job. He basically just studied his microsoft manuals and took care of me. Another thing he wouldn't do is ask me to marry him.

We had discussed marriage. We decided to marry. We wanted three kids. I had gone to http://www.adiamondisforever.com/ , designed a ring and emailed it to him. But he wanted to make sure it was right. "Babe, I will only do this once."

So there he was, no job, no asking him to marry me. The family was really great about it. Well, not really. But if it was my daughter I don't think I could have held my tongue. I don't think I ever told them he paid for the rent and for groceries. He was technically supporting me. But, even though he was this and crazy monkey love, there was no ring.

And the day before the day before I graduated I sort of had a meltdown. It was in the month of May, about two years into the relationship. It had become unbearable to me, just living with him. We loved each other so much. I wanted to be Mrs. Hall. Our future was stalled. Unable to start. I remember weeping and sobbing. Choking out the words, "You have to decide, either ask me by the end of the summer or that's it. I want to start our life."

The next night, the night before I graduated, we went out to dinner. He asked, "Where is a nice resturant around here?" (Again, he refused to learn the town.) I drove to the Olive Garden but he kind of freaked out when we got there. "Babe, no, no, this is not a nice resturant!" We drove about an hour out of town. This place was so fancy, I had never been there.

During the dinner he handed me a letter. It was my proposal in three typed paragraphs. The last line was, "Will you be my wife?"

You could have picked my up off the floor. Here is the ring. 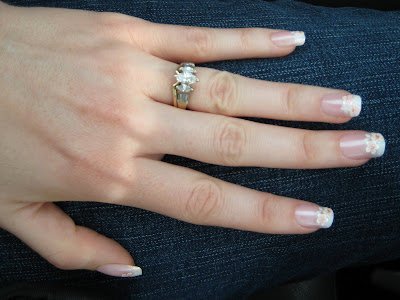 He designed it himself. In fact, for the previous four months, he had been designing the ring, choosing the diamonds and working with the jeweler on every detail. Did I tell you he was an engineer? He was crafty, that man of mine. Four months of going to a jewelery store, working every detail to his satisfaction. I had no idea. Clueless was I. And then I found out I was actually with him when he bought the ring. He is lucky he has a such a distractable wife.

In the end, I feel for Holly. Even though I really believe she loved Hef, it would have been a bad idea to marry him and have babies. In this crazy mess, I belief Hef was the voice of reason.

Hef says, "She'd like to be married and have children, but it's not in the cards here for me. There has to be some reality there."

At least she'll have the photos... 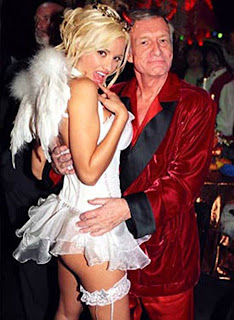 WAIT A MINUTE... She is blonde, has a very nice boobin' and my GOD! She is only four years younger than me. And isn't Hef like 82?

You are going to think I am making this up, so I am going to start looking for my yearbooks...

I went to school & was semi-friends with one Holly Hall. Even better, she married a man named Cash.

I swear this to you before all things holy. And holly.

This whole thing we have going on, this twin blogger weird coincidence thing...

Wonder what we'll figure out next?

and so now you are HollyHall. :)

I sent you an email linking to a webpage that I found with Holly featured in it. Also, I discovered that her married name is Kash. Interesting stuff though...
Small world, keeps getting smaller.