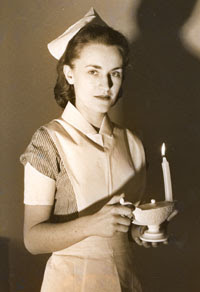 As I transition from registered nurse to psychiatric nurse pracitioner, my stories will also change. So far, I've spoken mostly about my current home health job. This is pretty easy to disguise as most patients have the same diagnoses and live in two dimensional houses. Not so easy with the mental health population.

As a psychiatric-np I will, for the most part, listen to people's stories. Everyone has a different way of talking. And while you can line up ten people with sinus infections and pretty much get the same symptoms, the same is not true of ten people with depression. Or schizophrenia, or OCD. Everyone is different and reports their symptoms accordingly.
What my patients give me, are tiny broken Robin's eggs. They have been sitting on them for so long, trying to take care of them all by themselves, they have actually squished them. Make no mistake, no one comes to my office voluntarily. Their families have given them ultimatums, their work is requiring it or the legal system says see me and cooperate or it's jail. Sometimes they are resigned to their fate. Sometimes they spit nails they're so mad.
All in all, that is the art of nursing. How to open those that are closed. It begins with meeting them where they are, what they hold dear. And putting them firmly in charge of the game. I am just a tool to help them self-actualize. To become who they want to be.
It is a skill I learned during my first health care job, a 'personal care worker (PCW)' with the mentally retarded or developmentally disabled as they are now known. I have never had such job satisfaction as when I taught someone, at age 56, how to dial a phone. Or helped a 34 year old have less outbursts in public so she could go to her beloved taco bell. It lit a fire in me that has been burning since age 19.
I moved up from PCW to certified nursing assistant (CNA) in a nursing home. This is truly God's work. Tending to dementia patients and their fragile bodies. Although, some of them were a good 300 lbs. The CNA's job is to help feed, dress and keep clean those that cannot for themselves. Nothing will influence my prescribing behavior more than this. To this day I cannot wrap my mind around 90 year olds needing 14 pills a day. Big horse pills too. Crushing them up in applesauce because they can no longer swallow properly. Wait, that is when I was a registered nurse in the nursing home. I helped people on their way out when I worked there. I watched life slip out of those I cared for. Death, like birth, is a miracle.
Either way, my first exposure to wild stories from the elderly was in the nursing homes. Those that have 90 years and a brain full of dementia can wind some interesting yarns. They also interpret things differently. I will always remember opening the door at six pm so Mable could feed the chickens. And while she hadn't lived on a farm for 30 years, I still delighted in hearing how it went. How the big ones always bullied the little ones. She even had names for them.
I was kind about these types of stories. Half the people would just ignore their stories or roll their eyes. "Crazy old people stories", they'd say.
And I suppose, someday it will be my turn to tell stories. I plan on outliving each and everyone. Well, not my kids, but . . . I have lots and lots of crazy stories. No one will believe them I'm sure.
Like the story of how, when I was 19, I left for the big city. I moved into a studio apartment with an artist. I had an army cot in the walk in closet that I slept on. He slept in the main room and had padlocks on all his stuff. The artist was a creepy guy. He went to a very expensive art school in the city. He liked to do 'art installations' with dead animals. One such project involved a pig's head he got from the local butcher. It was kept in our fridge for a week. He sewed an anarchy patch on it's forehead.
Pfft. Artists.

See, now who is going to believe that story from an old crazy lady?

Life isn't about how much money you earn or how many houses you have lived in, it is about the crazy stories you can tell at the end.

(who the hell will believe the one about my ex-wife and the 'awful truth'?)

Psych nursing was never my "thing".
I much prefer the trauma/ortho ward that I work on.

For the most part, nurses are loved here too. The thing that bothers me, is when someone's family member had a bad experience at our hospital years ago, so they're admitted with a chip on their shoulder already...

My schooling was awesome! It was the first time in life I knew exactly what I wanted to do, and I finished with the best marks I've ever had in my life.
My good friend's wife is from Alaska, and I think they will eventually move back there. If they do, you'll be gaining another great male nurse.

Bruce: So true, so true. And the awful truth about your wife is that her patterns are somewhat predictable based and completely believable. I am still letting the idea germinate, the post based on your ex-wife stories. I am sort of stuck really.

but, it will come in time. Afterall, that photograph is way too good to pass up. In fact, if I ever do lectures on the subject . . .

Chris: Hello nurse from Cananda!
Welcome to my blog!

Do they have nurse practitioners up in Canada?

I too found my calling while training to be a nurse. This job is the best eh?

Oh, the stories we could share, Mrs.Hall. I get it, though, it changes your life. I learned so many lessons in peace, understanding, acceptance from those that see life differently due to their particulars.

I am so excited for you. And, of course, I clicked on every link in the post. I'm not sure that wound debridement will be my favorite thing to learn in class next year. Who knows? I thought my husband's severed thumb was awesome though, oh the pictures I could show you!! They are great!

Hmmm. No Potters Field. Oh well, at least I didn't lose this time !

Well! I do remember you posted a photo of the thumbs er, toe on your site.

But, if have photos pre- surgery, by all means, send em on through!

And best of luck with nursing school!

Yeah we have NP's here, but technically, aren't you "up there"?

There is actually a push to get more Nurse Practitioners to ease the Doctors workloads.