Mr. Hall and I think nothing alike. That is not to say we don't have the very same thoughts about marriage, kids, and life in general. We just get there differently. I, for instance, am a romantic. It is all hearts and stars and fluffy kitties up here, in my head. I believe in things. I have passion and righteousness. And thus it is.

Mr. Hall is an engineer. For those of you who do not know an engineer let me explain. The main ingredient in the engineer's thinking is logic. There are not a lot of words. As a result, the words he does say carry extra importance. It is a tidy and efficient world up there, in Mr. Hall's head.

Which works to my advantage, because I am boundless.


He is the lines in my coloring book. In fact, he is downright fascinating. Just last week he explained in some detail this whole collider business. And while I tried my best to pay attention, something more important occured to me. It's not what he's saying that's important, it's the fact that I love him saying it. Talking about things like colliders make him all twitchy and sparky. He says things everything with such authority. Making everything so forthright. I love his electricity.

In my head, I have all sorts of buzzy ideas, which I post here. Mr. Hall has heard them for the past ten years we've been smooching. I also have a myriad of inventions. Those go to Mr. Hall. So far, none of my inventions have panned out.

My best idea was the Poor Man's Air Conditioner. It works like this: a ice pack, with openings, is attached over the face of a fan. Then- the air that flows through gets cooled down and you get the poor man's air conditioner. Wha-la! Ima genius!

This idea was shot down by Mr. Hall. Won't work he said. The pack would melt and you could get (air quotes) cold air for 10 seconds. Just won't work he said. And the ice pack will block the air, so the room will get hotter. Sorry babe, just won't work. Still love you though. And a kiss on the cheek closes the assessment.

I tried to argue. There has to be a way I say! If we just work the angles, maybe it will work.

Alas, I lost this engineering argument. If there is one thing I hate, it is trying to argue against logic. You just can't win. This was 3 years ago. 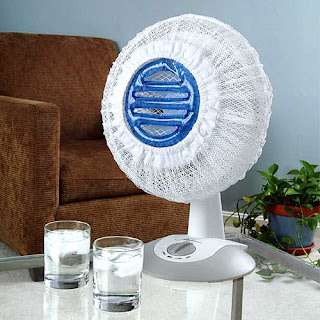 Can't say I didn't feel a little righteous when I came upon this beauty last week. After all, I was right, eh?

This was disappointing. After all, the romantic in me still believes anything is possible. Logic notwithstanding. So maybe, in some alternate universe this thing works. But not ours, not yet anyway.

But, I will always have Mr. Hall to run my inventions through his intricate engineering mind. And when he points out my mislogic, all while loving me. A girl can have everything, eh?

When I was a kid we had a portable "air conditioner" that worked on your premise. It was a rectangular unit with fans built into it that blew across a tray of cold water and out the slatted vents, which could be adjusted to blow in any direction you wanted. It was kind of a cooling humidifier and we had to fill the reservoir with water about once a day. When it got lost in a move in 2001, it was STILL WORKING GREAT.

I see now. It was just a matter of working the angles!!!

Thanks for the tip. I shall seek this device out on the interweb!

gotta say, i side with the Mr. on this one.

maybe its because i went to RPI (a geeky engineering school)..

us guys have to stick together...

I got here via That Gypsy Girl. I'm glad someone else remembers the old "air conditioners". My grandmother cooled her house with one, and it worked great. So, you were right in principle, and I have faith that if you had stayed on the angles, you would have eventually gotten there!

I think it takes a special type of brain to be an engineer. There is a confidence too, a confidence that he knows what he is talking about. I see customers of his react with the same fascination and trust I have. Very cool stuff indeed.

Mom: Hee hee, funny writing that name. I think there has to be a way I can get ahold of this old fashioned type of fan. I am on the hunt now that I have two confirmed sitings!

I like that you get patted on the can.

Proves that a girl CAN have everything! :)

My grandmother would put a bowl of ice in front of the fan and just change it out as it melts.

Sometimes 30 minutes is all you need.

I enjoyed my visit to your blog today Mrs. Hall, great reading! I hopped over from Slyde's.

This post really made me smile, good one. I am an engineer by trade also and you have a lot of it spot on here. Although, personally, I guess I am not the A-typical engineering type as I was actually an art major in school but real life takes over and we have to do what is needed to survive. But the artist brain has served me well, plenty of patents and endless streams of coworkers to my cube for problem solving advise. blah, blah.