Tori Amos used to be a big fat moon in my nighttime sky. My daytime sky too. Her songs spelled out my story for quite some time.

Her music happened to me during my year abroad. Again, it was long, naked and punk year. Again, I was nineteen. I was so happy that year. I giggled and giggled most every day. But, it was a solo project. At least at first. 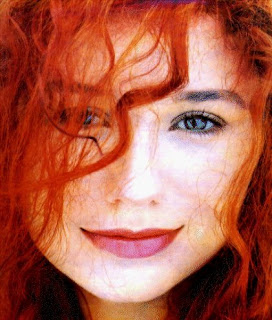 One day, I looked through the personal ads to find a friend. There was a quirky ad that read "looking for a rude girl for a rude boy with eclectic tastes". A bouncy and giggly message was left at the beep. On the other end was Rob.

Dating him was fast and fun. He introduced me to a whole other world of men. Men that played rugby and went to bars. Men that danced to ska, wore braces and drank shorties. I fell deeply in love with him. He was the first gentleman I had ever dated. He would open doors and speak softly.

His love of music was impressive. He made me mix tapes that were beyond compare. I found one the other day. He always used a black sharpie to neatly write out all the song and band names. He would even come up with clever titles for the mixes. His touch was always personal.

It felt so avant garde, dating him. So new and other worldly. I had never known anyone like him.

He was a wee bit older than me. Something like five years. I didn't realize it, but I wasn't showing him anything all that new. It was just new to me.

Let me repeat that. I was not new to him. This was a new experience, not being considered so unique, so different. It was the first time I felt normal, among my people. It was like finding a member of my tribe. Maybe I am not so different after all. 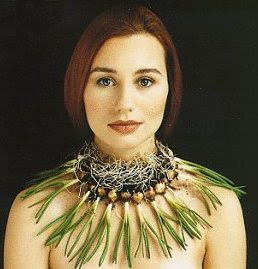 On every date, I would bring him little gifts from the dollar section at Walgreens. Little items with symbolic meanings. One time I brought him a soap box so that he would also remember to stand on it and speak his mind. It was a blue plastic soap box, but he got the idea anyway.

When we were in bed, we would share twixes, his favorite candy bar. I would keep my tights on for him because at that time, I didn't shave my legs or under arms. Stroking my thighs with the tights was more tactically pleasing.

Feminist inspired hygiene issues aside, he was very charmed by me. I feel deeply in love. So much so that when we talked on the phone, i heard whispers. I want to marry this guy, they said. I told him this. He said he loved me too. He was cautious though, at least that's what I thought he meant.

Our courtship was interrupted. Rob was in the army and went to serve in Bosnia. That soap box came in handy, it was a travel soap dish after all. We exchanged letters. He wrote about the devastation. How the area where they were stationed was the former site of the Olympics. Now it was a bunch of bombed out buildings. Him and his Sargent use to chuck oranges, breaking the windows.

He would tell me about the locals who had no idea how to make sandwiches for the "Americans". They would just throw a raw fish (complete with bones and scales) right on a bun. Tasty.

At that time, stateside, my love for Tori Amos grew unchecked. I had seen about four of her concerts at that point. I swam under her music, not coming up to breathe for another two years. I was obsessed. To this day I can here two notes from her first three albums (Silent All These Years, Under the Pink, Boys for Pele) and I can still sing any song, chapter and verse. All the lyrics here are from those albums.

All that emotional turmoil, all the things I was feeling was fodder in her songs. However, with each album, she began to lose control of the reins. Her music grew to be blathering. It became repetitive and lost it's meaning. 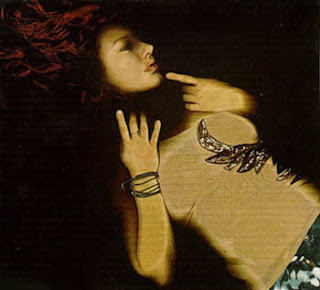 This was the problem with me too. I had no structure to who I was. My heart was formless and gushed without forethought. I was nowhere near a place of monogamy. Which was the one thing Rob had asked me for.

Ginger is always sincere
Just not to one man

I cheated on Rob, while he was in Bosnia. I don't think I can ever forgive myself for this. He knew about it before I told him. Things were obvious at that point.

He broke up with me. There was nothing dramatic about it, he just turned around and walked away, not weeping. But his hurt was overwhelming. My heart felt stomped on by his big army boots. And yes, it left a very big mess. I was a very big mess.

I spent an entire year in mourning. Twelve months of feeling so sad, so hurt. It was horrible. Serves me right. I still dated other people though. LOTS of people. Too many people. They all saw the hurt. My heart was still with him.

We would talk during this time. Rob was the kind of guy who made it a point to stay in contact with people he loves. He pursued my friendship despite my efforts to shut the door completely. Being with him was painful, I still loved him so much. He was a gentleman and let me heal.

After a while, things began to warm. I took a greyhound bus to Chicago to see him.

The inevitable backslide occurred. I remember siting across his lap. He was sitting up, facing me. We were in bed, waking up. I remember pontificating about my future. What was the next step? I could move down to Chicago and be his girlfriend. But, no. That wouldn't be right. He readily agreed.

I didn't realize it, but at the time, he never invited me to move in. He didn't call attention to this fact. He was a very kind man.

I had decided that my next step was to go to nursing school. Which I did.

I will always regret how I hurt Rob. How careless I was with his heart. I still ache when I think about it. Serves me right.

But I had to leave Tori behind. I had to eventually break up with her and her band. Too much drama from too much freedom.

I still have all of Rob's letters from his time in Bosnia though.

There is no way in hell I am going to read them. Maybe in ten years, but not now and not anytime soon.

I can thank him though, he was the first real man I dated. It was a good lesson to learn, what it is to be respected and heard. He never quite understood me though, but even I didn't understand me at that point. Never quite had a handle on me. That would be Mr. Hall's future job.

We kept in touch after I started nursing school. He did meet Mr. Hall. In fact, he took the very first picture of Mr. Hall and I. They liked each other, bantered about their respective time in the Army. Rob even stood up in our wedding. The last I had heard from him, was when I was pregnant with my daughter. I still miss him.

Take care Rob, you are an awesome guy.

Mr. Zebra is one minute and 34 seconds long.

Take a listen, you already read through the lyrics ;)

Labels: bands I've had to break up with, reading through the past, Rob, unforgiven

My "Rob" grew up to be the DJ at the popular radio station in the town I just moved from.

You described it perfectly, Mrs.

It was a powerful rite of passage into the Cam I am.

One of those nights when there are tons of important things to say, and yet...not. They've all been said.

B.E. Earl: Yes, I see what you are saying. This post is very self contained in it's own way, despite being so filled with choatic emotional themes.

It's complete in the tornado it is.

ok thanks for reading :)

That was a very long post....but an exceptional one. Once I started reading, I hoped it would never end. The best writing that any of us can do is the the stuff that comes deep from the bottom of our hearts. Thanks for digging deep down, and sharing.

Bruce: Oh this post just breaks my heart. It is probably the only one I didn't have written out before I started to type.

And really, I could put about 16 more paragraphs in here.

I can say that there is a whole other section to the story with me and rob. And I do believe his story will get a part two in the next installment of 'bands i've had to break up with'.

thank you though, thank you for being touched by this post, for not wanting it to end.

stay tuned, he gets another post, this Rob guy.

I agree with Bruce: it was an exceptional post.

You have a talent, Holly Hall.

Oh Pissy, you say the nicest things. :) And I do believe this post will automatically go into the Mrs. Hall Hall of fame :)