Random bits of dialogue heard at the House of Hall:

"I don't support food that is trying to be other food. I mean, you don't see carrots pretending to be bread or beets trying to be strawberries. I love vegetables, I love eating them, but not when they are trying to fake me out as a burger."

(It would be his first sentence I believe, man o man how cool is that? My son can now connect words to make sentences!)

While Mrs. Hall is backing up the car and putting on her seat belt at the same time:

Pancake: "MOMMY! I didn't know the could start when you aren't holding the steering wheel!"

As Mr. Hall explains why he needs to go to the battery store because his truck battery died after work.

Mrs. Hall (interupting the story): "Ok, um, how hard do I have to listen to this story? I mean, you got home right? You didn't call me so I am assuming that it worked out somehow, I mean, um, do I have to help you at the end of the story or what?"

Mr. Hall: "No babe, all you had do to is listen to the story, but I see you don't really wanna. Love ya anyway though."

OK OK. I realize just how rude my statement was. But come on, I had just spent 48 alone with the kids and they were in bed for the night. I was settling in to watch 30 rock on hulu (thanks Mr. Ajooja for making it's existence known to me!) 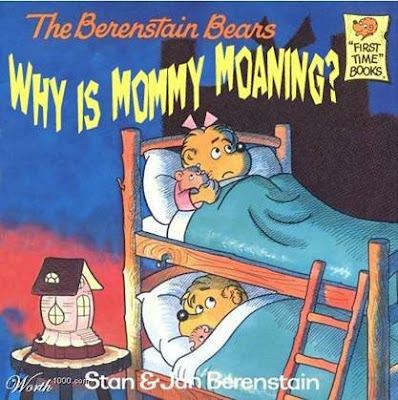 She actually came into the room, all scared for me.

We had to explain that everything was ehem, just fine.

I think that's the stupidest logic ever. By that train of thought, he's not gonna eat carrot cake, or banana bread, or pumpkin pie, or turkey burgers, or even chocolate posing as little bunnies? I don't eat that vapid veggie shit because it tastes nasty. Period. And yes, you may call me Brown. Although, you might find that mr poopie is more enjoyable to say.

you dont REALLY say kisses smooches to your man, do you? please tell me yo dont..

Bruce: Yes, the statement does have a certain amount of logic.

Mr. Brown Poopie: I see what you mean there. Hmm. Well. Guess that will have to go into the next discussion I have with Mr. Hall on the subject.

Slyde: Actually, I do say keeses smooches most every time. And with the free minutes between the two cell phones we talk about every two hours. It is almost like having real bits of conversation. Lord knows when we are home with the holler monkees, adult conversation is hard to come by.

I ate a veggie burger, and it gave me the worst, smelliest gas of my life.
No, seriously. I was running away from it all day long.

Sorry for sharing too much. I realize it crosses a line.

And, our young'un has caught us too. Nothing will take you out of the moment quite like being caught by your child...

Yay! You came to the new blog! I hoped that you would.

You inspire change in the world, Mrs. Hall. You have such a grown up name, and I felt so girlish. So, gypsy girlish.

Besides, my poor mother couldn't keep it all straight. I was forever having to delete comments to protect the innocent & the guilty.

Sorry for the extra work about updating the address, I know you have enough going on...

I hope you are enjoying your stay at La Casa de Hall.

Please feel free to leave any suggestions you might have to improve our service right here, in the suggestion box.

Thank you and come again,