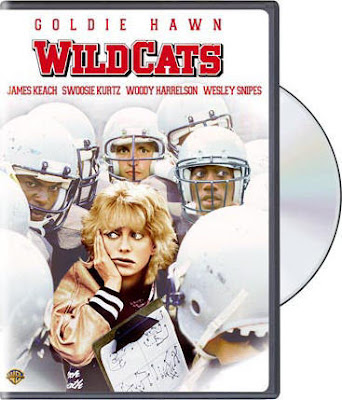 In 1986 Wildcats was released. I was 10, my brother was 12. He played football in the pee wee league, in high school and in college. He coaches football and teaches physical education for a living now. He's 35, I'm 33.

I really had no use for sports or phys. ed. growing up. I could've gotten to know my brother a lot more if I was into sports. But I wasn't. Years and years worth of games and I never went. It just wasn't my thing. bah.. That's crazy sauce.

No matter what, this movie will always be tied to my brother. We watched it over and over again on the VCR. I had no idea how inappropriate it was for a 10 year old to be watching this film. After all, re watching it recently, I noticed a truckload of swears and some blatant Goldie Hawn nudity. 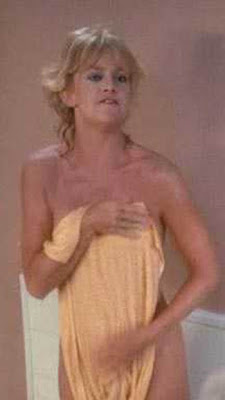 Goldie Hawn is a woman who was born and bred to be a football coach. Only she has a jerk for a boss. A jerk that doesn't want her to coach. But, he eventually gives up and gives her a job coaching high school ball. Unfortunately, this job is in the ghetto. The Wildcats are comprised of hoodlums and ne'er do wells. Here they are in the ghetto milieu. 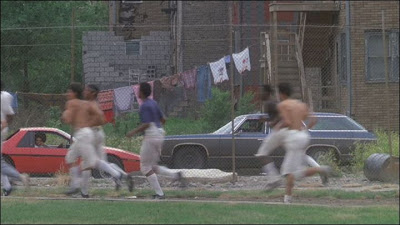 Meanwhile, she is also a mother of two girls, a teenager and a 12 year old. A single mother. I didn't get this story line when I was a wee pup. Watching it a few days ago though, I was blown away. And now I can't stop thinking about it.

There's a scene where she comes come late from practice. She tries to hastily make dinner. The older teenage girl pitches a fit, she just wants to go to the library. The 12 year old girl whines because she is not home as much. 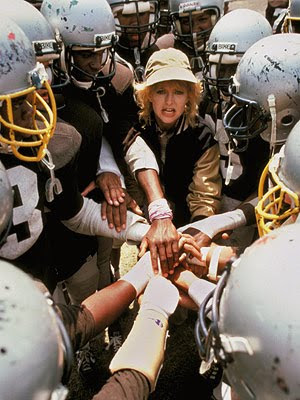 Goldie Hawn takes the girls onto her bed and explains the following.

The 12 year old girl pipes up, "I wanna be an astronaut."

The teenage girl goes, "Don't be stupid, you can't be an astronaut." And rolls her eyes all stupid teenage girl like.

To which Goldie Hawn replies, "She can be anything she wants."

Then she hugs them and I just about lost it.

Because I am a mom that does not home school, bake bread or sew her kids clothes from scratch. I am a nurse practitioner who spends 9 hours a day in the service of others. I have every weeknight and every weekend off. And I hope and pray that because of this, I am being the best Mommy I can be. I am showing my girl that if you work hard enough, if you dig deep, you can conquer anything.

If you have enough fortitude and work hard enough, your dreams will come true. 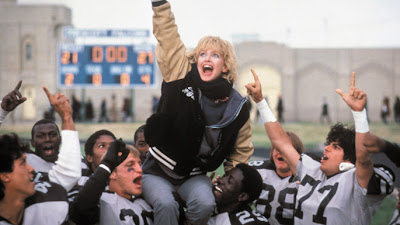 So let's end this with my favorite scene.

This scene is from early in the film. The team is none to pleased with a woman coach. They try to degrade her and make her quit.

She gets pissed. She then challenges them to see who's tougher. If they win, she quits, if she wins they start calling her by her proper name, Coach.

Goldie Hawn Naked! That is all that I noticed.

Is it "crazy sauce"?

DUDE! I completely forgot about that movie!

"You owe me a new stopwatch! You pussies!!!"

just gives me tingles all up and down my arm... :)

Pissy: Really, why doesn't she make movies anymore? I mean, she is quality all the way!

E: It is indeed crazy sauce :) And ya, I would have totatlly forgotten about it too if I hadn't seen bits of it on cable the other day. Awesome stuff!!

YEAH girls!!!!!
I'll have to watch this movie again. It's been a long time.
Thanks,
xo