I've never been a fan of the 'bangs below the eyebrows' hair cut. I always get twitchy when such things appear on screen. I reflexively push my bangs to the side. Yet there she was, with her bangs in her eyes. I was stilled by it.

I will never forget the scene where she is in a white tank top, cotton hospital pajama bottoms, having just clobbered the guard with a broken broom stick and then she runs down the hall. 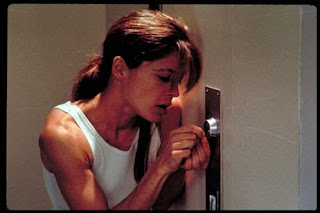 She has the guards black nightstick tucked behind her. The hospital is all white and moonlit. She skips along the hallway, staying very close to the wall. She is very deft and quiet. I remember how it felt watching this. I remember feeling the vinyl flooring, the socks on her feet. It was all surreal and hushed.

The hospital she was in, was a crazy hospital. She often looked crazy in that film. 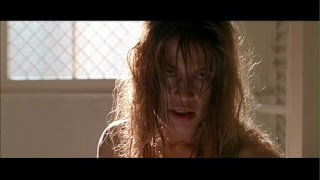 The Terminator films fall under the category of "Science Fiction". Also, the star of the film is this machine like man. 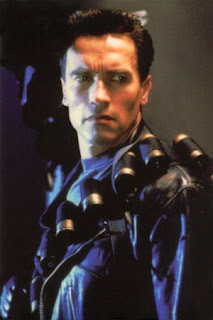 I can tell you I have never seen a film with him in it. Well, besides this film. I am not sure I ever saw Terminator One. I am not a girl who understands Science Fiction very easily. Which is sad for me. My husband just loves Blade Runner. I've watched it about three times now. I still have no idea what the heck.

The same can be said for this film. The underpinnings escape me somewhat. What never failed to escape me is the humanity of it all. That crazy woman had a son. Edward Furlong was my age when this came about. He's my age now.

After she escapes the hospital, she meets up with her son. There is lots of shooting. She escapes in a car with her son. They haven't seen each other for quite sometime. He is a confused, messed up kid sitting in the backseat who just sprung his mom from the booby hatch. He is elated. She is in the passenger seat. She turns around and reaches for him as they speed down the highway. He leans forward for a hug. 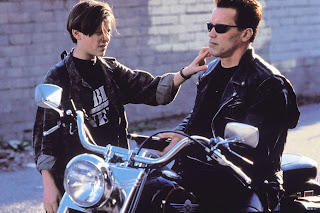 But she's not hugging him. She's patting him down to make sure he's not shot. He is hurt by this. I was crushed a bit too. 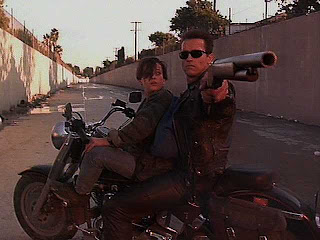 There's a speech that Sarah Conner has. Clad in a army green tank top, smoking a cig, cleaning her gun. She's watching her son high five Arnold. She talks about who Arnold is to her son. He is a man who will protect her son at all costs and never leave him. Of all the father figures she could have chosen, this is the one who is the best.

And as crazy as she is, she's right. But then again, mom's usually are. 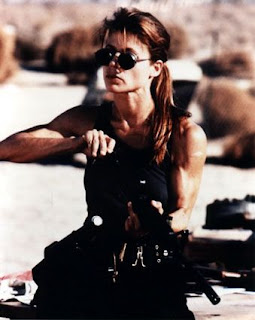 Now, you tell me. What do you remember of T2?

And for the love of Pete! Did ya'll know there was a T4?

Well I do know for a fact that she was not wearing socks when she was running down the hallway.

There is even a Terminator (if it's still on) series....

T2 is a massive amount of fun!

It perfectly follows the much scarier Terminator, which was more of a Horror film with sci-fi elememts. As T2 was an action film with sci-fi elements. The switching of roles for Ahnuld from a killing machine to a protector was amazing. I remember seeing it in the theater and being blown away by it. Easily the Governator's best film.

T3 was a sloppy film and a sad ending to the trilogy. T4 acts as a better sequel to T2, but it has it's faults as well. If you are going to rank them in order of greatness, you have T2, Terminator, T4 and T3 last. T3 is still fun, just not great fun.

And the Terminator TV show (The Sarah Conner Chronicles) was my favorite TV show of the best two years. It was truly amazing, but it garnered no ratings. So it has been canceled, sadly.

And I have to agree with Wil. She was barefoot in that scene.

I no longer has that pesky "bangs below the eyebrows" problem :(

This was the best of the terminator movies, because it was produced by James Cameron on large budget. This film is best viewed almost as a stand alone film, with the original as sort of a prologue. The films after this are not really worth watching, because they are just trying to squeese out more profit on the concept of doomsday and machines.

The fact that "ahh-nold" become governor of California after this sort of closed the loop on media / political surrealism.

I remember that I loved this movie and that I wanted my body to look like Sarah Connor's did in that movie.

Me an' mom don't know anything 'bout these types o' flicks, either.

Wil: Yeah, I'm gonna have to say you are wrong. I remember socks.... but thanks for playing ;)

Le Savage: I know about the series, alas, no time or gumption to go through the effort to download them and watch them. Maybe someday . . .

Earl: good analysis! I do remember seeing T3 but, mostly i remember feeling sad for Edward Furlong not being in it. (he has developed a problem with the bottle and all). Maybe I'll look up the chronicles . .

AND SHE WAS TOO WEARING SOCKS!!!!

Bruce: I agree. The film does stand on it's own. And sequels really do detract from the original. I have no idea how Arnold became gov. I mean, I have read articles detailing his service thus far, but there is really not much he can do as gov. Isn't CA like 5 billion dollars in debt as far as the state budge goes?

No amount of muscle can fix that!

Heff: I do wonder how you pull off the rather odd mullet thing you have going on. I mean, during your day job. Whilst being all stand alone, helping reassure people through paper means.

Hank!: you should watch this. It is great fun for people who don't know nuthin bout no sci fi!!!

As a man that has had a raging foot fetish for as long as he can remember, I assure you she was not wearing socks running down the hall. Besides, she would have been skipping all over, think about it.

Guess we'll just have to agree to disagree. Or rather, I'll agree I am right and you are wrong but not say it outloud. hee hee hee

I tried my best while coming up with this post to find an actual photo of her running down the hall with the billy club. If you can get a screen cap of that, it will settle things but until then

Me and my teenage hormones lusted after that kid starting in Pet Semetary part two...

Other than that, I remember that his mamacita had gotten ripped up for this part! Homegirl was in SHAPE!!