B. E. Earl was talking about kittehs today. So let's talk about mine. 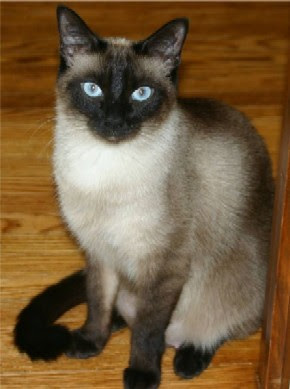 I have a Siamese named Prince Albert. No, not after the genital piercing (go ahead, google that!). He's named after the joke, "Do you have Prince Albert in a Can?" We got him before we were married. He is about 12 years old. But here's the thing about Siamese: they never get fat, and they never get old. He's still spry as all get out. And loud.

SIAMESE ARE THE LOUDEST MOFOS. Seriously. The howling, the yowling, the crazy meowing. People routinely ask if he's in heat. No. No I say, just a siamese. In fact. When I was loading the cartoon below, he started howling again. He's very dapper and punk rock all at the same time. He sleeps with my daughter every night and wakes me up most every morning. :)

My kitteh is all black and our vet thinks he has siamese in him because he whines more than a newborn baby. But I do love the personality. :)

Ever thought....maybe he is partially deaf?

o wait. any sound of ice cream being scooped into a bowl or the carving a roasted chicken will have him flying towards the kitchen from all four corners of the house.