Mr. Hall was embarrased by my (almost) death 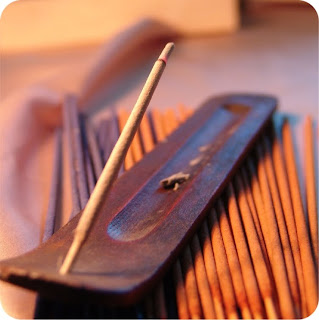 I use to have a datsun hatchback. AKA . . . the POS car. No a/c. In it I would drive two hours to visit Mr. Hall. Two hours through the country and the cow smell. It was summer. The cow smell was terrible. Again, no ac, so the windows would be down.

I began to light incense in the car. I would affix it to the vent by trapping tiny stick end in the tightly closed vent slots. It filled my car with incense smell- thus eliminating the splendor of cow smell.

About half way through, as I was whipping through the long country roads, the stick would be done. I would affix a new stick and try to light it. Only my windows were down. Non power windows. So they stayed down. And there I was, going 55 mph. And I fussed and flicked and tried my hardest to get the lighter to light. But it wouldn't for the wind.

And I almost crashed my car into a ditch. I didn't though. It was an almost death.

So I am telling Mr. Hall this story. I was expecting concern over my near accident.

"I can't believe you did that??!! Man, I would be embarrassed to tell people you died like that. It's just unbelievable. I think I would have to make up another version of your death. I would be so embarrassed."

To which he replied,

SO THERE YA GO. A story from the dating days of Mr. & Mrs. Hall!

Labels: mr. hall gets cranky at me

You have to admit that "she died rescuing orphans from a burning schoolbus" makes a better eulogy than "she died for her love of patchouli".

Damn. You even embarrassed ME with that one.

Gonna have to side with Mr. Hall on this one. You need to take a bit of literary license and add some space aliens or terrorists tot this story. Otherwise, you almost died for what? Cow smell and incense.....think about it.

Good job there weren't black boxes in cars and a different outcome.

Heff: I'm a little embarrassed myself

Bruce: yeah, will have to doctor the story

White Rabbit: OOOooohh there's a ton of stories where I was doing something dumb and am lucky to be alive. I'm more careful now.